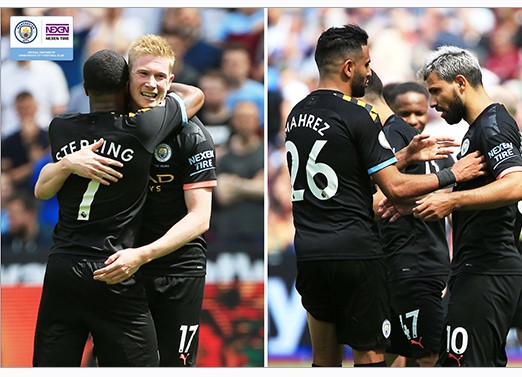 Manchester City made a strong start in the competition as the defending champion defeating Preston North End in September last year. The club has since continued its winning journey throughout the tournament, securing its final victory by defeating Aston Villa FC 2-1 on March 1 (GMT).

“As the Official Sleeve Partner of Manchester City, we congratulate the team for their continued success, adding another Carabao Cup title to its illustrious achievements,” said Travis Kang, Global CEO of Nexen Tire. “We are thrilled to continue supporting the club at various major tournaments around the world. Based on this strategic partnership, Nexen Tire also had the opportunity to strengthen brand value among football fans worldwide.”

Nexen Tire has been an Official Partner of Manchester City since 2015 and bolstered support for the club by becoming the first-ever Official Sleeve Partner in the Premier League in March 2017. The sleeve partnership has proven to be mutually beneficial for both parties with the club winning every Carabao Cup since the partnership kicked off.

Building on the great synergy, Nexen Tire and Manchester City have celebrated together the club’s Premier League title wins over the past two seasons in addition to the three consecutive Carabao Cup victories. Such positive momentum from the partnership also provided steppingstones for Nexen Tire to write a new chapter in the company’s history as a major global player, with successful establishment of the four major R&D centers around the world.

Nexen Tire will continue to have a significant presence at all Manchester City matches in the Premier League and other domestic and international tournaments. The company will focus on further raising awareness of Nexen Tire’s premium brand globally through related sports marketing initiatives.

About Nexen Tire
Nexen Tire, established in 1942, is a global tire manufacturer headquartered in South Korea. Nexen Tire, one of the world’s fastest growing tire manufacturers, currently interacts with approximately 150 countries around the world and owns four manufacturing plants – two in Korea (Yangsan and Changnyeong) and one in Qingdao, China. Another plant in Žatec, the Czech Republic has also begun operation in 2019.
Nexen Tire produces tires for passenger cars, SUVs, and light trucks with advanced technology and excellence in design. The company also focuses on producing UHP tires, which are based on advanced technologies. Nexen Tire supplies OE tires to global car makers in various countries around the world. In 2014, the company achieved a grand slam of the world’s top 4 design awards for the first time amongst the various tire makers in the world.
For more information, please visit https://www.nexentire.com/international/

Scroll back to top